Atlantic City was America’s first mega-resort.  As early as the 1870s, Atlantic City attracted hundreds of thousands of visitors annually, most of who hailed from nearby Philadelphia where inexpensive train travel made a weekend holiday or day trip possible.  By 1920, the 7-mile long Boardwalk and the magnificent piers that stretched far into the ocean were crowded with amusements of every sort.  Next to the Boardwalk were the hulking hotels that, at the time, were among the largest in the world. 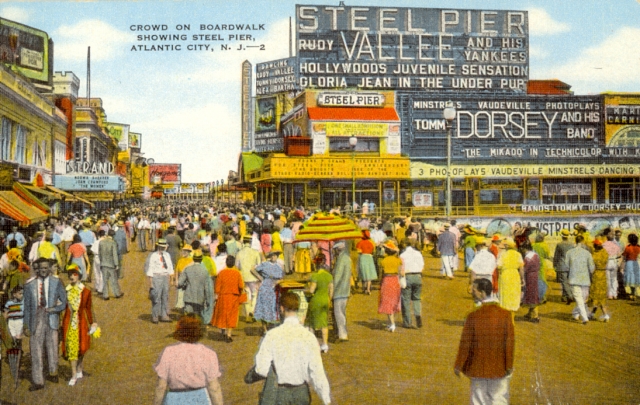 From the back of the postcard: “The Steel Pier, extending almost one-half mile into the Atlantic Ocean, is surely the greatest amusement enterprise under one roof in the world.  With its five theatres, vaudeville, minstrels, water carnival, ballroom dancing and unusual exhibits, its diversity of entertainment makes a visit to the Pier a vacation in itself.”

For 30 years, from 1911 until his incarceration in 1941 for income tax evasion, the king of Atlantic City was Enoch ‘Nucky’ Johnson, the flamboyant political boss and power broker who nurtured and protected the illegal booze, gambling, and prostitution that made the city the America’s top tourist and convention destination from Prohibition through the advent of World War II.

Writes Jonathan Van Meter in his excellent book The Last Good Time: Skinny D’Amato, the Notorious 500 Club & the Rise and Fall of Atlantic City, “Shortly after the turn of the century, Atlantic City’s personality began to split, and the Boardwalk represented a physical and psychic boundary between the two halves.  On one side, there was the beach and the ocean and all the recreation that went with it, which is to say good, clean family fun. … On the other side of the Boardwalk, down dark, narrow side streets like Westminster Place, known as Snake Alley, the city was a banquet of temptation: sex, gambling, booze, drugs, gay bars, and black speakeasies.  It had also become – as it remains – one of the first and only twenty-four-hour cities in America.”

The Clicquot Club “never closed.” It was one of the notorious Atlantic City nightclubs where its illegal gambling room was the main attraction. 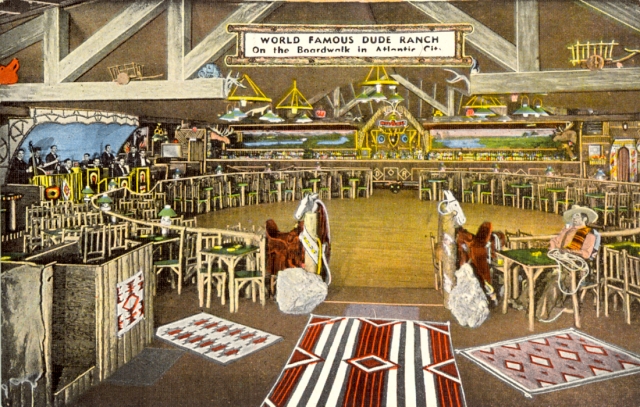 The “World Famous” Dude Ranch was a western-themed nightclub somewhat out of place at the Atlantic Ocean.

A report by the federal government from 1941 reprinted in Van Meter’s book describes the lawless atmosphere of Nucky Johnson’s Atlantic City.  “The casinos were generally connected with nightclubs which acted as ‘feeders’ for the gambling rooms.  For example, the Paradise Club, the Club Harlem, Babette’s, Grace’s Little Belmont, the Bath & Turf Club, the Clicquot Club, were all typical nightclubs with bar, restaurant and cabaret entertainement, but in the back of each was a gambling room containing all forms of games, such as roulette wheels, crap tables, poker, blackjack games, ‘bird cage,’ and in most instances horserace betting as well. 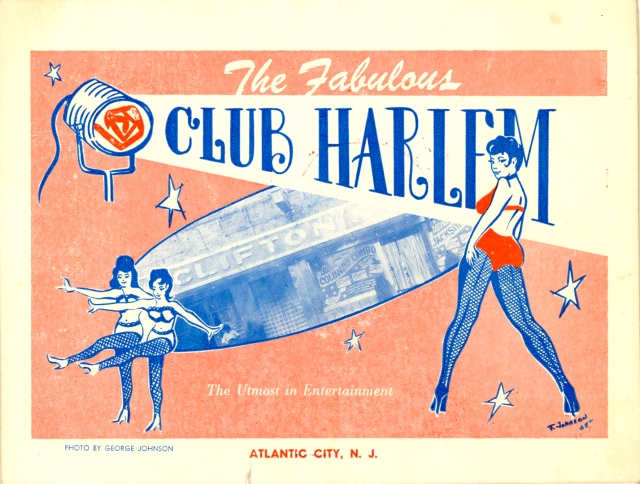 Club Harlem was a popular African-American nightclub that, as was typical of Atlantic City clubs, offered gambling in its back room. 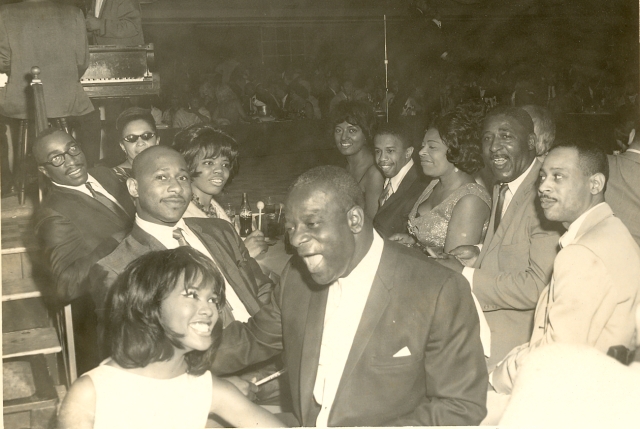 Club Harlem in the early 1960s

The nightclubs were well known and widely advertised establishments which employed high-priced orchestras and Broadway or Hollywood stars as entertainers.  The proprietors of these places apparently cared little whether they made any profit on the ‘clubs’ for there were primarily gamblers and relied on the cabarets solely to bring business to their gambling casinos.” 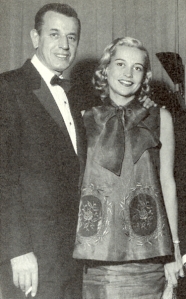 Skinny D'Amato and his wife Bettyjane in the late 1950s

In the early 1940s, a well-connected Atlantic City casino operator named Paul “Skinny” D’Amato gained control of the 500 Café, a foundering nightclub with an illegal casino located in the back room.  Within a few years, Skinny turned the renamed 500 Club into the most important nightclub in the city in no small part because of the pairing of two unlikely performers for the first time on his stage. 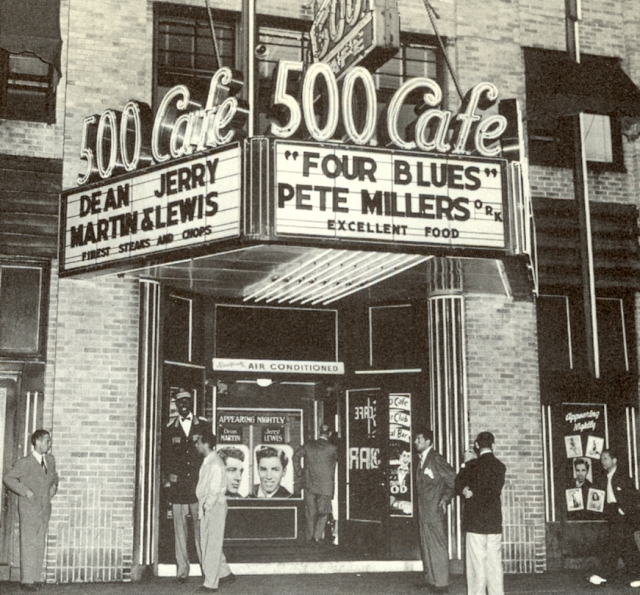 The 500 Club in 1946 when Martin & Lewis teamed up for the first time. Note Dean Martin looking to the left.. 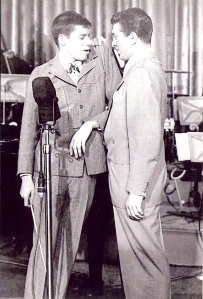 There are various accounts about how they were first teamed up at the 500 Club in the Summer of 1946, but what is certain is that by their third night on stage together there were crowds lined up around the block, frantic to witness the insane antics of Dean Martin, a debonair Italian-American crooner, and a manic rubber-faced Jewish kid named Jerry Lewis.  Several years later, in 1951, at the lowest point in his career, a doleful Frank Sinatra began his comeback when his old friend Skinny booked him for an extended run at the 500 Club. 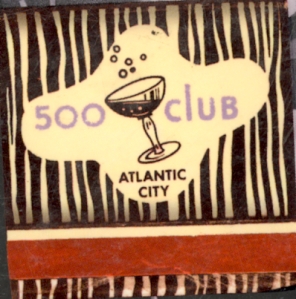 Sinatra, Sophie Tucker, Jimmy Durante, and, of course, Dean Martin and Jerry Lewis all considered Skinny D’Amato among their closest friends.  Skinny’s generosity, good humor, and suave sophistication – as well as his well-publicized association with mob characters, movie stars, sports figures, and politicians – lent Atlantic City an aura of self-assurance that belied its declining fortunes in the postwar era.  Indeed, by the late 1950s, air travel made destinations such as Miami Beach, Havana, and Las Vegas easily accessible, bypassing the rapidly decaying Boardwalk of Atlantic City.  It took the legalization of gambling in 1979 to reverse – and erase – in a drastic and brutal fashion, the world of Nucky Johnson and Skinny D’Amato that once defined Atlantic City.

Author and historian Peter Moruzzi is passionate about the middle decades of the 20th century: its nightlife, classic dining, and architecture. Born in Concord, Massachusetts and raised in Hawaii, Moruzzi graduated from the University of California at Berkeley and later attended the American Film Institute in Los Angeles. In 1999, he founded the Palm Springs Modern Committee (PS ModCom) an architectural preservation group. He is the author of "Havana Before Castro: When Cuba Was a Tropical Playground," "Palm Springs Holiday: A Vintage Tour From Palm Springs to the Salton Sea," "Classic Dining:Discovering America's Finest Mid-Century Restaurants," "Palm Springs Paradise: Vintage Photographs from America's Desert Playground," and "Greetings from Los Angeles." His latest pictorial history, "Greetings from Las Vegas" will be available in September, 2019.
View all posts by Peter Moruzzi →
Gallery | This entry was posted in Home and tagged 500 Club, Boardwalk, Club Clicquot, Club Harlem, Dean Martin, Illegal gambling, Jerry Lewis, Martin & Lewis, Skinny D'Amato, Steel Pier, Traymore Hotel. Bookmark the permalink.