After World War II the famous Dallas restaurateur Nick DeGeorge opened his Town & Country restaurant up the street from his earlier Italian place called DeGeorge’s.  Nick was so proud of his fancy new digs that he wrote the “Story of Superiority” to highlight every aspect.

A young Nick DeGeorge with his spaghet

Nick mentions that he travels to the country’s leading restaurants to secure improved methods of serving food.  He doesn’t tell you that he stole the idea for his Rolling Beef Cart from Lawry’s The Prime Rib restaurant in Beverly Hills, California, where the cart was invented.

The Roller Beef Cart at the Town & Country Restaurant

I love these types of continental-style fine dining restaurants that existed everywhere in America but that have mostly vanished in recent decades.  Continental cuisine was an eclectic melding of European and American dishes floridly described in elaborate menus.  The key elements of a classic fine dining restaurant included white tablecloths, leather or semicircular vinyl booths of red, dark brown or black vinyl, indirect lighting in often-windowless rooms, tuxedoed captains and waiters, and tableside service. 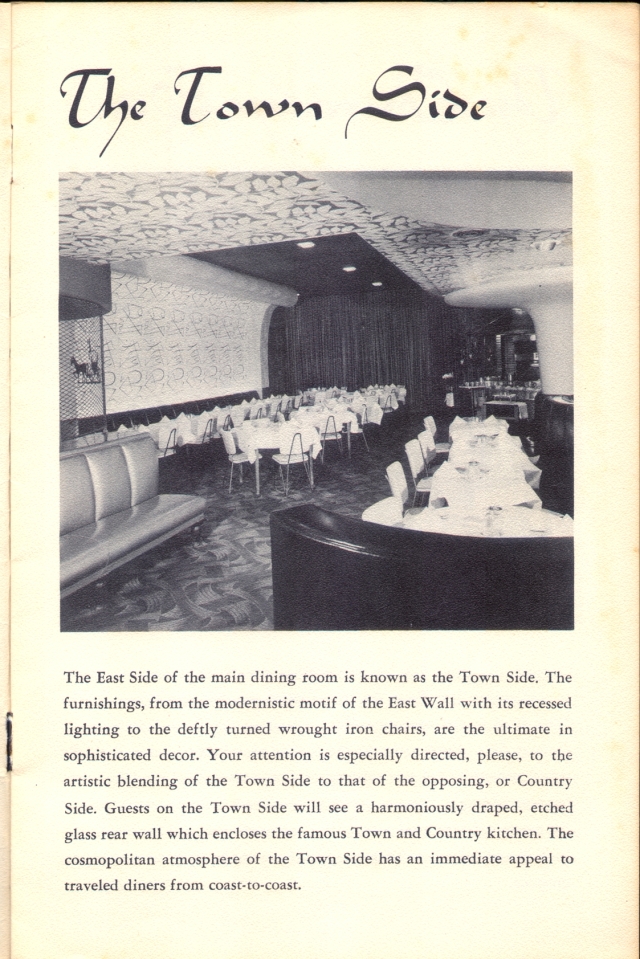 Nick describes the ‘Town Side’ of the Town & Country restaurant as having a ‘modernistic motif’ that differed substantially from the restaurant’s ‘Country Side.’  Town & Country was a popular name not only for restaurants but also for motels in the U.S. in the 1950s and 1960s.

Town & Country Restaurant's "Story of Superiority" The Country Side

Mirrors and a serpentine divan make the Country Side more informal and ‘sedate.’  The Story of Superiority also highlights the Sirloin Room, Seafood and Salad Bar, the Garden Room, the Banquet Room, and the Cocktail Corner.  Customers relished Tableside Salad Service where “the dexterity and the ‘Know-How’ of the Salad Chef will intrigue you.”  In another blog I’ll write about my obsession with table-side Caesar Salad.

Mmmmm, Sirloin Swimming in its Own Juices

At the Town & Country you could brand your steak with either R for rare, M for medium or W for well done. “Your steak will be served table side with your preference still plainly legible.”

The Sirloin Room at the Town & Country Restaurant

Nick wasn’t bashful with his color scheme.  The center of the room was where you’d find an “array of the finest steaks in the meat packing industry.” 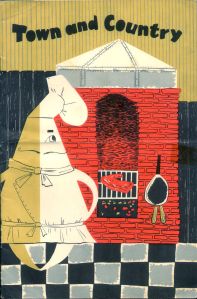 Nick DeGeorge’s Town & Country restaurant was a really big deal in 1950s Dallas.  I’m not sure when ol’ St. Nick passed on but I would guess that his restaurant didn’t survive long without him.

As Nick wrote at the end of his booklet, “We pledge ourselves to continue our best efforts to make you, our guest, enjoy every minute of your visit.”

Here’s to Nick DeGeorge and all those like him.

Author and historian Peter Moruzzi is passionate about the middle decades of the 20th century: its nightlife, classic dining, and architecture. Born in Concord, Massachusetts and raised in Hawaii, Moruzzi graduated from the University of California at Berkeley and later attended the American Film Institute in Los Angeles. In 1999, he founded the Palm Springs Modern Committee (PS ModCom) an architectural preservation group. He is the author of "Havana Before Castro: When Cuba Was a Tropical Playground," "Palm Springs Holiday: A Vintage Tour From Palm Springs to the Salton Sea," "Classic Dining:Discovering America's Finest Mid-Century Restaurants," "Palm Springs Paradise: Vintage Photographs from America's Desert Playground," and "Greetings from Los Angeles." His latest pictorial history, "Greetings from Las Vegas" will be available in September, 2019.
View all posts by Peter Moruzzi →
Gallery | This entry was posted in Home and tagged 1950s, caesar salad, continental style, Dallas, Fine Dining, menu, modernistic, Nick DeGeorge, nightlife, postcard, restaurant, restaurateur, steak, steakhouse, surf and turf, Town and Country, vinyl booths. Bookmark the permalink.