In June of last year I posted about The Magic of Tableside Caesar Salad at the Dal Rae.  In it I waxed poetic about my love of a great Caesar and how the Dal Rae in Pico Rivera was my favorite haunt for first class tableside preparation.  Since then, a miracle has occurred.

Recently, a New Yorker article profiled the dynamic young Tijuana-based chef Javier Plascencia’s successful efforts in establishing a gourmet food culture in his native city.  His focus on creating exciting new dishes utilizing local ingredients has led to the emergence of Tijuana as a foodie destination for locals and adventurous Americans.

In 2010, Javier’s brother Juan Plascencia reopened the long dilapidated Caesar’s Restaurant on Tijuana’s faded Avenida Revolucion following a complete renovation.  As you will recall from my earlier blog, the Caesar Salad was invented by Caesar Cardini at his Tijuana restaurant in 1924!

Cardini had originally operated a restaurant in San Diego, California, but relocated to Tijuana with the advent of Prohibition.  Like many restaurateurs, Cardini believed a fine meal on-the-town required cocktails before dinner and wine with dinner.  In Tijuana, he could offer both. 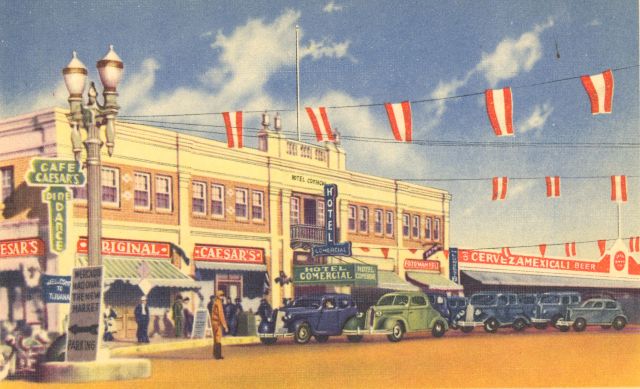 Caesar's Restaurant in 1924 at its original site before moving to its current location in 1927.

According to Caesar’s daughter Rosa, her father invented the dish when a Fourth of July 1924 rush depleted the kitchen’s supplies. Cardini made do with what he had, adding the dramatic flair of the tableside tossing “by the chef.”  Whether or not this is actually the salad’s origin, the result is the most spectacular salad in the world. 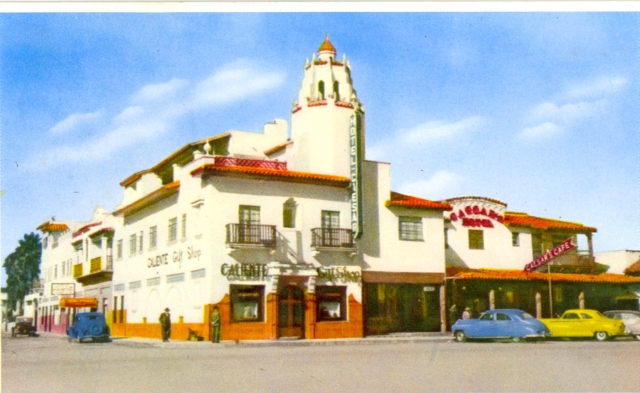 Caesar's Restaurant in the 1940s

Last Saturday, Polynesian Pop historian Sven A. Kirsten, merchandising maven Naomi Alper, and I made a pilgrimage to Caesar’s Restaurant to experience the original recipe for ourselves. We drove to the border, parked our car, walked to the Mexican side, and took a $5 taxi ride to Caesar’s door.

Pete and Naomi at Caesar's entrance

And, just as when the restaurant was supervised by Caesar Cardini, a formally dressed ensaladero prepared the original Caesar Salad recipe tableside. 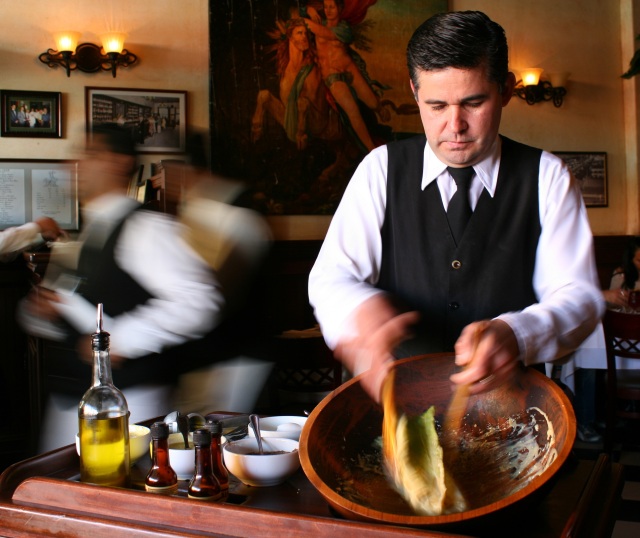 To me, the return of the Caesar Salad properly prepared by a skilled ensaladero in its restaurant of origin is nothing short of a miracle. 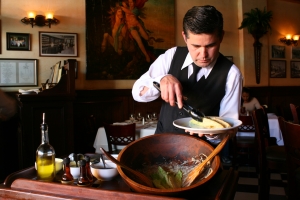 Montoya carefully arranges each leaf. Unlike American Caesar, the original requires a knife as well as a fork.

Differing from the original, the American version adds red wine vinegar, Tabasco Sauce, and lemon juice instead of lime to the recipe.

Witnessing the Master at Work

And the result?  HEAVEN!

In addition, the restaurant is top drawer – first rate.  Excellent cuisine, terrific service, beautiful interior with walls lined with historic photos of old Tijuana.   Prices are reasonable.  And the bar is fully stocked and tended by a knowledgeable bartender.

Caesar’s restored interior. An island of civility on Avenida Revolucion

Following our cab ride back to the border we waited about 45 minutes in a line with some fascinating people to pass through U.S. customs (you need a passport now).   Oh, and by the way, there were no narcoterrorists roaming the streets and we felt completely safe.  Sadly, because of irrational fear, there were few American tourists on Avenida Revolucion, which is very weird if you remember what that once-crazy street was like in the 1990s.  So, the point is, there is no excuse for you not to follow our lead and get on down to TJ and the original Caesar’s!

15 Responses to Home of Original Caesar Salad Reopens in Tijuana